The Department of Ecology and Evolutionary Biology (EBIO), at the University of  Colorado, Boulder, invites applicants for the position of Science Teaching Fellow to assist with enhancing teaching and learning in our undergraduate courses.

Candidates should hold a doctoral degree in Biology, Biology Education or a related field and have excellent organizational, interpersonal communication, team building and collaboration skills. The candidate’s primary interest and some experience should be in science education. Experience in developing active learning curricula and coaching educators is highly desirable.

The successful candidate will collaborate with new faculty towards the following goals: formulate learning goals, develop an active learning-based curriculum that aligns with the learning goals, provide feedback on faculty teaching practices, and assess learning gains.

The salary for this 1-year appointment will be competitive and commensurate with experience.  Applicants should submit a single pdf containing their CV, a statement of teaching philosophy, and the names, phone numbers, and email addresses of three individuals who can serve as references to am@colorado.edu. To ensure full consideration, applications must be received by June 30, 2013.

The University of Colorado at Boulder is an Equal Opportunity/Affirmative Action Institution committed to cultural diversity and compliance with the Americans with Disabilities Act. Women and minorities encouraged to apply. We invite applications from qualified candidates who share our commitment to diversity. The University of Colorado conducts background checks on all final applicants being considered for employment.
Posted by Andrea at 11:40 AM No comments:

Higher ed will be revamped in 15 years

Just quickly sharing a video link from Reuters. Larry Summers (former Harvard President and Treasury Secretary) shares his opinions on higher education and the inevitability its "transformation".  Despite the fact that institutions of higher education tend to mightily resist change;  he thinks that thanks to technology, Universities won't be able to help but evolve.

Survey on LGBTQ in STEM

"In the fields of science, technology, engineering and mathematics (STEM), the social experiences of lesbian, gay, bisexual, transgendered, or queer (LGBTQ) professionals are often overlooked. Those of us who work in STEM research or teaching know that LGBTQ colleagues are out there, if we know where to look, but we know very little about the LGBTQ folks who work in STEM, as a group."

More info and the survey link can be found here. Spread the word!
Posted by Andrea at 11:37 AM No comments:

IN THE NEWS: No shortage of US STEM Talent

The Washington Post reports on a new study (titled: Guestworkers in the High-skill U.S. Labor Market: An analysis of supply, employment, and wage trends) that finds no shortage of domestic STEM talent. This study is limited to the IT sector and focuses on those with undergraduate degrees. While I believe that similar issues plague other STEM driven employment sectors, I'm a bit wary as to how the results of this study can be generalized so that the titles of the W.P. article and the study are warranted.  Cheers!
Posted by Andrea at 12:06 PM No comments:

The End of an Era: The Scientist Publishes it's 10th (and final) "Best Places to Work:Postdocs" Survey

After 10 years of giving voice to the workforce concerns of postdocs, The Scientist is calling it quits.  (This year, the Whitehead Institute for Biomedical Research has set the standard of excellence.) Their claim is that a lot has changed since the first survey was taken in 2003. Most significantly, institutions take the compensation, quality of life, institutional support and mentoring concerns of postdocs far more seriously.  The author acknowledges that many issues, like the lack of tenure track positions, "continue to stress the postdoctoral researcher," so they are not turning their back on the postdoctoral research community. It is just that addressing the basic financial and workplace needs of postdocs, the motivation for this survey, appears to be of less concern.  Hopefully, the end of this survey and the publication of its results will not mark the end of an era--one where adequate consideration is given to the treatment of postdocs. 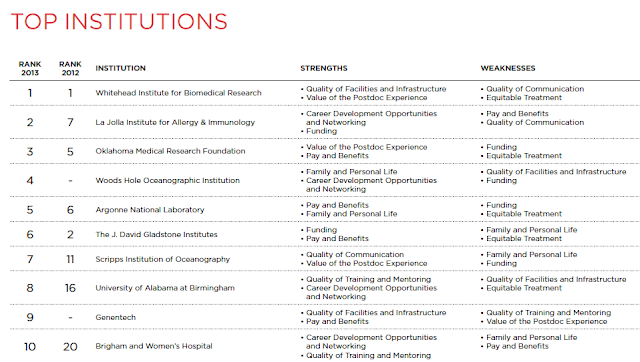 In my next post, I'll review From Ph.D. to Professoriate: The Role of the Institution in Fostering the Advancement of Postdoc Women.
Posted by Andrea at 6:22 PM 1 comment:

My blog has been quiet for quite a while, but in an effort to revive my interest in higher education policy, I thought I'd simply post this Inside Higher Ed report which finds lingering racism in British higher education. Not that there is anything shocking or surprising in this report...and certainly this is not unique to Great Britain. It just strikes much closer to home now that I have chosen to work at a University. I feel that the dilemma about what to do is much more personal... do I demand change or redouble my commitment  to working "twice as hard"?
Posted by Andrea at 2:39 PM No comments:

Despite the lack of blog posts as proof, Pat and I have continued to talk about race… but committing those words to paper has been tricky. But we have agreed to talk struggle and write on…Believe us, this is harder than it looks!

For this post, we’re reflecting—independently—on the concept of race and identity. As a Black female, I threw the question out there…which am I first? Or perhaps, how do I more strongly identify—as being Black or as being female. My thoughts on that question may have been interesting—but Pat, as she often does, flipped the issue on its head, and came up with a question technically equivalent, but still far more interesting.

Basically, Pat asked if I could imagine Mitt Romney, Harry Reid, Bill Clinton (ha ha!), or Ryan Seacrest contemplating whether they are male or White first? While this question regarding race and identity seems highly relevant for me, I wonder what would drive a Caucasian male to ponder this.

For me, I thought about my race and gender much more when I moved abroad. I found the experience “interesting” when I moved to Germany…There, I felt more defined by my being American. Although perceptions of my being Black and female were slightly different than how I’d grown up thinking about them—it still was not something that challenged me.

China was a very different matter—these were topics that I agonized over regularly. Let's just say that I stood out... a lot; and I found it quite stressful. I had a tall blonde friend who told me that, on the street, people treated her the same way as they did me…but it didn’t bother her. By comparison, I knew other black women (regardless of nationality) who felt similarly as I did.

Anyway, I could go into detail about this experience and my thoughts on it, but for now, I think my major point is that based on these experiences abroad, I do think that both my race and my gender are parts of my identity and that they are shaped by social structures and history. Choosing to challenge, question, or accept these parts of my identity depends on place, depends on the person I’m interacting with.

Living abroad, I realized that people saw me differently (a simple fact) and I was forced more to draw on perhaps the deeper (and more true?) aspects of my personality (read identity?) to react and interact with these people who were strangers and culturally strange to me…while it wasn’t always pretty, it also could be fun and interesting.

The environment where I live and the people I associate with are factors that I can’t control (even if I can to some extent choose where I live). I, of course, can’t choose my race, gender, etc. etc. etc. But thanks to my experiences, my race, and my gender, I am lucky to be challenged to question who I am and to contemplate the person that I want to project to the world.